In our view, sapphires are simply wonderful. Through the ages they’ve remained at the top of the popularity charts. But, what makes sapphires so special? And other than their irresistible colour, what else is there to know about this gorgeous gemstone? 1.) Traditionally, a sapphire is most commonly associated with nobility, sincerity, truthfulness and faithfulness. In truth, if you were ever paired with a stone you’d want it to be a sapphire. 2.) The name sapphire probably refers to the Greek word for another stone, lapis lazuli. Lapis lazuli was originally referred to as Sappheiros, which over time was simplified to Sapphire. 3.) During the Middle Ages, clergymen wore blue sapphires to symbolize heaven, and ordinary folks thought the gem attracted heavenly blessings. 4.) Not all sapphires are blue. In fact sapphires can come in every colour of the rainbow, including yellow, pink, orange and even green. However, red sapphires are better known as rubies. 5.) One type of Sapphire is the rarest of them all. The Padparadscha Sapphire has a pinkish orange hue with the wonderfully exotic name translating to lotus flower in Sanskrit. 6.) The only difference between a sapphire and a ruby is their colour. Both rubies and sapphires contain the mineral corundum, rate at a 9/10 on the Mohs hardness scale and have the exact same refractive index and specific gravity rate. 7.) The deep “royal blue” of a Sapphire has made the stone a must-have for monarchs since medieval times, however, did you know that ancient kings believed these gemstones would protect them from their enemies? 8.) The French Emperor Napoleon Bonaparte gave his beloved Josephine a sapphire engagement ring in 1796. In 2013 the ring sold at auction for close to a million dollars and features two stunning pear shaped stones placed next to each other, the first, a diamond and the second a sapphire. 9.) Some of the stones change colour in different lights. In the daylight the stones are a natural royal blue colour, but when heated they display a purplish hue. 10.) The most famous sapphire known today is that of Princess Diana’s engagement ring, given to her by Prince Charles in 1981. The ring is now worn by Princess Catherine, the Duchess of Cambridge and consists of an 18-carat oval blue sapphire surrounded by diamonds. If you're a fan of this iconic royal ring, take at look at this 18k White Gold Sapphire Diamond Cluster Ring. 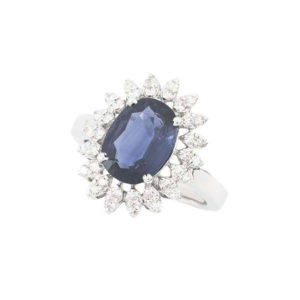 We have a stunning selection of sapphires pieces now available for purchase, shop the range now!

I hope you are all well and healthy.

Due to the re-emergence of coronavirus (COVID-19), we face another lockdown for at least one month, maybe longer. We must all therefore continue to work together and for each other, and adapt to different ways of working to meet and overcome this challenge. At Richdiamonds, our priority is the health, safety and well-being of our employees, customers, our partners and suppliers, and all the communities where we operate.

We will still be working in our offices and online for 6 days a week, so please do call or email us for any of your enquiries as we will be operating fully on a "Click and Collect" basis.

We will still continue to buy and sell watches and jewellery whilst also receiving and sending parcels via post and Fedex. We hope you and your families continue to stay healthy and safe during these uncertain and unprecedented times.